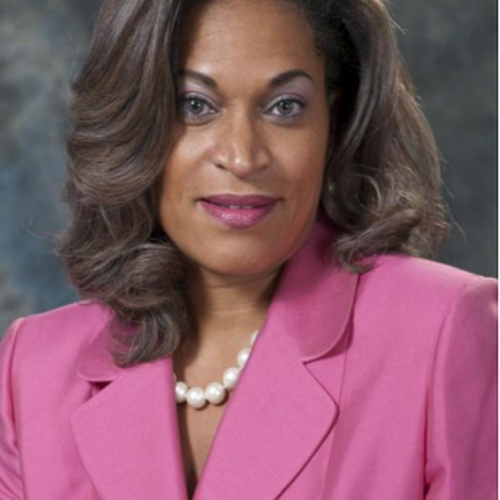 Executive Director of Government & External Affairs for the School District of Philadelphia
"The Links Incorporated: Co-Chair of the Legislative and Public Affairs Committee

Evelyn Sample-Oates, is often described as a bridge builder, a motivator, a mover and shaker, a person of resource, the consummate advocate for the voiceless and ambassador for the hopeless. She is one of the “Go-To” people in Philadelphia to get the job done according to the Philadelphia Tribune newspaper.
Professionally, she is the Executive Director of Government & External Affairs for the School District of Philadelphia. She oversees all direct initiatives for the Superintendent with internal and external constituents as it relates to achieving success and positive outcomes directly associated to the mission of the District. Evelyn works on short and long-range strategic planning, advocacy, partnerships, government relations, and community engagement programs to support the District’s critical priorities. She builds one-on-one relationships with community, business, and civic leaders to call upon them for collaborative ventures; leveraging long-term and new relationships with elected officials to establish School District champions; and supports the creation and expansion of partnerships with local non-profit and for-profit businesses and institutions to generate financial support for the school district.
Her career spans more than three decades of media and public relations experience, and executive leadership in both for-profit and non-profit corporations. Evelyn prides herself on being an advocate for public education spearheading community gatherings, roundtables and town hall meetings in hopes of educating people on the state of public education and the urgency to improve the system to save our children. She has organized thousands of people to rally on the steps of the Pennsylvania state capitol building in Harrisburg, led campaigns for equal rights and launched media campaigns to inform stakeholders of the urgent need to help all children receive a fair and equitable education.
She is deeply involved in community service and serves on several boards. Her awards and honors are numerous and her appreciation is endless, because she lives her life knowing, “That to Whom Much is Given, Much Is Required.” She was initiated into the Founding Chapter of The Links incorporated in 2005 in Philadelphia. She currently serves as the Co-Chair of the Legislative and Public Affairs Committee for the Eastern Area of the Links, Inc. She is a proud member of Jack & Jill of America and a devoted lifetime member of Alpha Kappa Alpha Sorority, Inc.
She is a proud graduate of the American University in Washington, DC where she received her degree in Broadcast Journalism with a minor in Business Administration. She is a devoted member of Enon Tabernacle Baptist Church in Philadelphia, PA., and has been married to her best friend for nineteen years, Dr. Patrick Oates. To this day, her parents remain her role models and her heroes. Her biggest, brightest and proudest accomplishment to date is being the mother of two wonderful children; Andrea-Rose (16) and John-Patrick Oates (12).