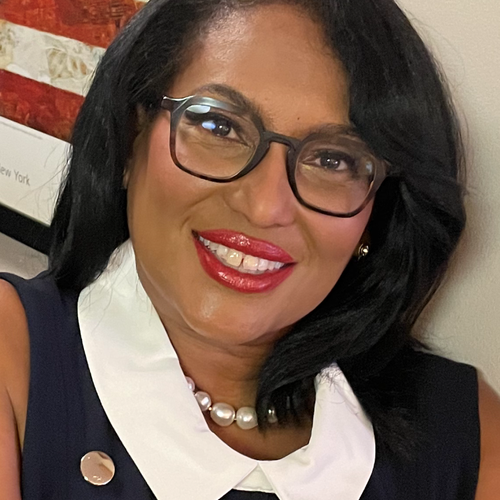 For over two decades, as a media and political strategist, Onida Coward Mayers has been at the forefront of media and voter engagement in New York City. Credited for creating and launching several civic engagement firsts including NYC’s Video Voter Guide, NYC Voter Awareness Month and the NYC Youth Poet Laureate (YPL) program, Student Voter Registration Day, New Citizen registrations and the annual “Voter Day” in Albany. Most recently she launched Shield the Voter a 45 day nationwide campaign that distributed 10,000 free face shields to those who wanted to vote in person during the historic 2020 Federal elections. Ms. Coward-Mayers is the Vice President of the MirRam Group, a governmental firm providing strategic consulting experience in Government, Political Campaigns, and Communications. Ms. Coward-Mayers advices a broad range of clients on both local, state and federal matters. Prior to joining the MirRam group, Mrs. Coward Mayers began her career with the City under the Bloomberg administration where she served as the Agency Head for the Voter Assistance Commission and continued Director for the Voter Assistance where she was key in the launch of NYC Votes. She proudly led New York City to first place in the United States, for highest number of people registered in a single day on National Voter Registration Day from 2015 - 2017. Ms. Coward Mayers was the Co-Founder of the Youth Poet Laureate Program where its poets have performed before audiences at NYC City Hall Inaugurations and the 2021 Biden Harris Inauguration. A true Brooklynite, Mrs. Mayers was the Founding Director of Brooklyn Community Access Television/ BCAT at BRIC where she led the design, construction, launch and daily management of the 10,000 square foot multi-media, multimillion-dollar television station where she launched and executive produced many local and international television programs. Prior to BCAT, Ms. Mayers was the Manager of Corporate Communications for the Time Warner’s Manhattan Public and Leased Access Television channels and studios. Mrs. Coward Mayers has served as Adjunct Lecturer at the City University of New York, Medgar Evers College and Brooklyn College where she taught Speech and Broadcasting respectively. Born in Panama and raised in Brooklyn, she attended public and parochial schools in Brooklyn and graduated from Buffalo State College, received her MBA from the Zicklin School of Business at Baruch College/City University of New York. Ms. Mayers, an Afro Latina, is a member of the NAACP Brooklyn branch, Jack and Jill of America, Inc., Alpha Kappa Alpha Sorority, Inc., Delta Rho Omega Chapter, The Links Incorporated and Cornerstone Baptist Church. She is the Vice Chair of Represent Women and served on WNET, Higher Heights for America and Civically Re-Engaged Women boards. She is a resident of Bedford Stuyvesant, Brooklyn where she resides with her husband Gregorio Mayers, Esq., a University Professor, two children, Carlos and Lavoneia and her doggy Ginger.